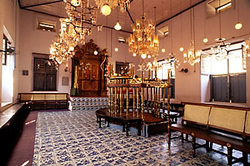 The Paradesi Synagogue, in a corner of Jew Town, is more than a hundred years old and houses many rare antiques.  The synagogue, that woos many visitors, adds to the quaint charm of Mattancherry.

History
The Jewish synagogue was built in 1568, almost 1500 years after the beginning of the Jewish connection with Kerala. It was built on the land, adjacent to the Mattancherry Palace, given by the erstwhile king of Cochin.

The synagogue, the oldest in the Commonwealth, was built by the Jewish community of Cochin. In 1662, it was destroyed by the Portguese and then reconstructed, two years later, by the Dutch.

The name
The word Paradesi means foreigner in many Indian languages. It refers to the White Jews -  A mixture of Jews from Kodungalloor, Middle East and Europe.

Antique elements, architecture and ambience
Enter the synagogue and the large main hall arrests your attention with display of rare antique objects that add to the grandeur of the place. The light falling through the large open windows make the sight of chandeliers and lamps more delightful. These glass chandeliers dangling from the ceiling belong to the 19th century and were imported from Belgium.

The floor of the synagogue itself is a showpiece with the paving of hand-painted blue willow patterned floor tiles. These ceramic tiles were brought from Canton, China in the 18th century by Ezekiel Rahabi, a renowned Jewish businessman. Each tile is different from one another in its design and it never fails to capture the admiration of the visitors. The marvellous construction of the synagogue is revealed in all its features including the splendid pillars.

A pulpit with brass rails is built in the center of the room. An exclusive gallery for women with gilt columns, a carved teak ark etc can be seen in the synagogue.  The teak Ark houses four scrolls of Torah (the first five books of Old Testament) and they are encased in silver and gold. Two gold crowns presented to the Jewish Community by the Kings of Kochi and Travancore are also kept here.

Another valuable possession of the synagogue is the copper plates belonging to the 4th century with inscriptions in Malayalam. The inscriptions describe the privileges granted to the community by the erstwhile Cochin king. It is written in kannadiyezhuthu script or mirror image writing. An oriental rug gifted to the Jews by the last Ethiopian Emperor, Haile Selassie is also kept in the synagogue.

Ceremonies
Due to the dwindling number of Jews in Kochi, it is difficult to complete a minyan - the number of men needed to sustain a synagogue). The service is conducted only when the quorum of ten male members is met.

Visiting time
The synagogue is open every day except Fridays, Saturdays and Jewish holidays.
Timings: forenoon - 10 am to 12 noon; afternoon - 3 pm to 5 pm.
Visitors are expected to enter the synagogue barefoot.